From the Hollywood Reporter:

For now, the agreement would allow Tom Holland’s Spider-Man to helm one more Marvel-produced Sony film and appear in another Marvel film.  It also appears that, for now, Marvel is officially acknowledging that the Sony Marvel Universe is in the same universe as the MCU, even if they’re not going to frequently cross paths.  This is bad news for those of us who wanted to pretend that Venom wasn’t a part of the MCU but it’s good news for Spider-Man fans.  Spider-Man has always been one of the key figures in Marvel history and the idea of him just disappearing from the Marvel Cinematic Universe just didn’t feel right, especially considering that Spider-Man: Homecoming ended with a pretty big cliffhanger.

The rumor, right now, is that the next Spider-Man film would feature both Scorpion and Kraven as the main villains.  Could this mean, as many have suggested, that the film is going to be based on Kraven’s Last Hunt?  I hope so.  Kraven was a great character and Kraven’s Last Hunt is one of Spider-Man’s defining and most cinematic stories.  With Spider-Man now probably a fugitive, Kraven would have even more of a reason to hunt him.

Whatever happens, I’m glad to see Spider-Man where he belongs.

This is from the 5th Annual Saturn Awards, which were televised on January 14th, 1978.  Was William Shatner having a laugh here or was he actually being serious?  Shatner really didn’t start to actively parody his image until the late 80s so there’s a good chance that this is for real.

There are some day when you really find yourself questioning your life choices and today is one of those days.

I woke up this morning to discover that my air conditioner is leaking water.  As I sit here, waiting for someone to come out and fix it, I can’t help but feel that I missed a major opportunity.  If, when I was in college, I had realized that I was going to end up staying in Texas after graduation, I would have studied air conditioning repair.  Not only would I be able to fix my air conditioner on my own but I would also be guaranteed a lifelong career.  No one can live in this state without air conditioning.

I often think about the roads not taken.  I suppose that’s true for everyone.  For the most part, I’m happy with the choices that I’ve made.  Though I’ve missed out on a few opportunities and I’ve had to make some hard choices, most of my decisions have worked out well for me.  But right now, I’d give anything to know how to fix an air conditioner on my own.

…of the Trump/Ukraine call, it now seems like the most notable thing about it is that Trump talks like that in private too.

I didn’t see anything impeachable.  I didn’t see anything good about it either.  Nothing about the transcript comes across as anything that you would want the president to say while representing the country.  But if you’re going to put this nation through impeachment this close to an election, you need something more than this.

My feeling has always been the same.  Let the voters have their say.  Getting Trump out through a legitimate election is far preferable to getting him out through a partisan impeachment process.

What’s amazing to me about the current drive to impeach the President is how blasé   everyone is about it.  The Democrats have been trying to impeach him since before he was even sworn in, often at the expense of their own credibility.  The Republicans have been reflexively defending Trump against every charge, even the ones that have been worthy of closer scrutiny.  Everyone has known that some sort of impeachment was coming and now that it’s about to arrive, no one seems to care what it might mean for the country as a whole.

If Trump is removed, his supporters will says he was railroaded and they will undoubtedly look forward to any opportunity to do the same thing to a President Warren.  If Trump is not removed, an angry Resistance will continue to push the Democrats further to the Left.  Neither outcome will be a victory for America and it all could have been avoided if people on both sides hadn’t lost their damn minds after Trump was elected.  If the Democrats hadn’t become the Resistance and if the Republicans hadn’t become the Party of Trump, more people would be willing to seriously consider the charges against Trump and whether they warrant impeachment.  Instead, we’ve surrendered to hysteria.

Whether Trump is removed from office or not, this is not going to end well for anyone.

Today has brought the sad news that Sid Haig has died at the age of 80.

Most people today know Sid Haig as Captain Spaulding but Sid had a long career that reached back to the 60s.  Before he was cast as Spaulding, Sid played a lot of what he called “stupid heavies,” inarticulate thugs who only existed to start fights and get beaten down by the heroes.  Haig even retired briefly from acting in 1992 and turned down a chance to play Marcellus in Pulp Fiction because he thought it was just going to be another low-budget B-movie.  Like many actors who were often cast as brainless characters, Sid was intelligent, funny, and poetic off-screen.

My favorite Sid Haig roles will always be Django, the guerrilla leader that he played in The Big Bird Cage.  It was one of the many films that Haig did opposite Pam Grier and, for once, he got to be one of the good guys.  Haig did much of his best work opposite Grier.  Pulp Fiction even had the potential to be a Grier-Haig reunion film because, just as Sid was considered for Marcellus, Grier read for Mia.  Quentin Tarantino eventually would bring them together again for Jackie Brown.  Sid finally got to play a judge.

Between William Shatner jumping out of a helicopter, Heather Locklear dancing, and all of the exploding cars, this is the most 80s credits sequence that I’ve ever seen.

If they can bring back Magnum and Hawaii 5-0, why not T.J. Hooker?

I’m going to miss him.  His presidential campaign was even more improbable than Eric Swalwell’s and distinguished by even more hubris.  His campaign served as a reminder that every politician, no matter how incompetent and unpopular, wakes up every morning and sees a future president staring back at them from the bathroom mirror.

The main lesson to learned from the de Blasio campaign is the lesson that many politicians have had to learn the hard way.  If you want to be president, don’t run for mayor of New York.

This is from the “it seemed like a good idea at the time” file:

We don’t need a remake of The Princess Bride, especially not one made by the same film industry that gave us the recent versions of Aladdin and The Lion King.

What we do need is a decent Fantastic Four movie.  Can’t someone get on that?

Hollywood always wants to remake the classics.  I think it would make more sense to remake the films that didn’t work the first time.  For instance, why not give Ishtar, Waterworld, and The Postman another shot?  How about a remake of Heaven’s Gate?  How about another Lone Ranger film?   I recently rewatched Battlefield Earth and, believe it or not, I think there is room for improvement.

Get on it, Hollywood! 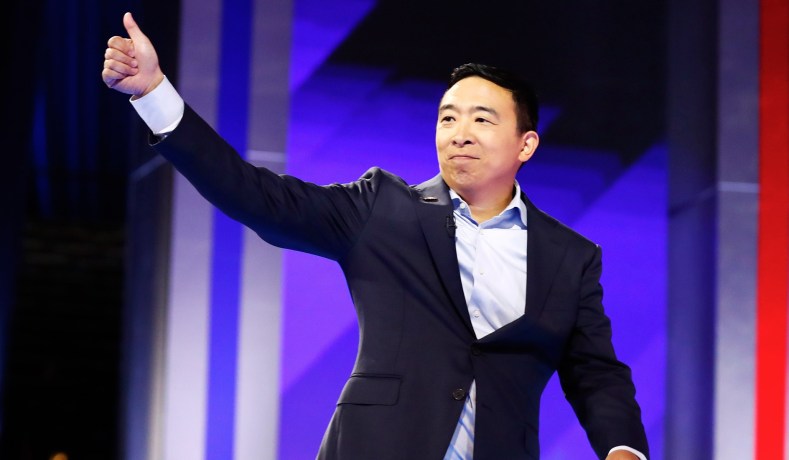 Don’t get me wrong.  I won’t be voting for him.  I disagree with the majority of his policy proposals.  As far as politics are concerned, though we both share some common concerns about Donald Trump,  we are on opposite sides of the partisan divide.

But, on a personal level, I like the guy.  Unlike the professional politicians that he’s facing in the Democratic primaries, he seems to be running because of a sincere love for this country and a desire to make it a better place.  Obviously, you have to a high opinion of yourself to think that you could be President but it’s still hard not to notice that Yang seems to be far more modest and open-minded than Biden, Warren, Sanders, Harris, Buttigieg, or O’Rourke.  While the other contenders are hopping onto every trend and saying whatever they think their base wants to here, Yang has consistently been the only candidate willing to say that there’s more to campaigning and governing than blindly punishing the other side.

There’s a lot of talk about how candidates like Harris, Castro, and O’Rourke have hurt themselves with bad debate performances.  To me, the talk should be about how Yang has risen in the polls after each debate, despite never being given as much time to make his case as the other candidates.  Obviously, many people are responding to Yang’s promise of a universal basic income but there’s also an authenticity to Yang that is missing in the other candidates.

I may not agree with Andew Yang on a lot of things but he is the sort of person who I wish we had more of in politics.